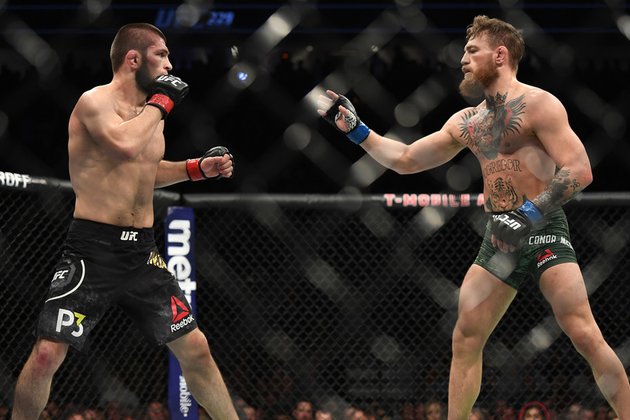 McGregor, who was defeated by unbeaten Russian star Nurmagomedov in a chaotic contest back in 2018, took to Twitter to address his foe after Khabib was asked during a speaking engagement to describe the success that his fight team has enjoyed in recent weeks.

At the aforementioned public appearance in Toronto, Khabib borrowed one of McGregor's greatest hits to explain that his training partners are here to dominate their divisions indefinitely.

The line was a nod to one uttered by McGregor following his star-making victory against Diego Brandao in his home city of Dublin in 2014, in which he said that he and his SBG Ireland team weren't in the UFC "just to take part" but rather to "take over."

And this certainly didn't sit well with McGregor, who took to Twitter to compose his riposte.

"I fight on!" he wrote in response to the video clip of Nurmagomedov in a since-deleted Tweet.

"Your father's plan is never complete because you quit and ran, brother. God bless. I'm still here if you wanna go again. But your fear of defeat means you've already lost. Run from it all you want. We all lose in the end. Death takes us all. I fear nothing but God."

However, it appears that McGregor will be disappointed if he truly is pursuing a rematch with Khabib after the Russian star confirmed in the same speaking engagement that he has no plans to return to the cage, and that he is more than happy with being a full-time MMA coach for the likes of Makhachev and Usman Nurmagomedov - continuing the job started by his late father and trainer, Abdulmanap.

The fight between Khabib and McGregor, which took place in Las Vegas in October 2018, was the most-watched UFC fight card of all time and ended when Khabib submitted McGregor in the fourth round with a neck crank.

The drama continued after the final bell when Nurmagomedov jumped from the cage to attack members of McGregor's training staff, while other fighters associated with Khabib entered the Octagon to brawl with McGregor - with the Nevada Athletic Commission handing out a series of fines and suspensions in the aftermath.

McGregor remains inactive in mixed martial arts while he completes his recovery from a badly broken leg sustained in his summer 2021 loss to Dustin Poirier.