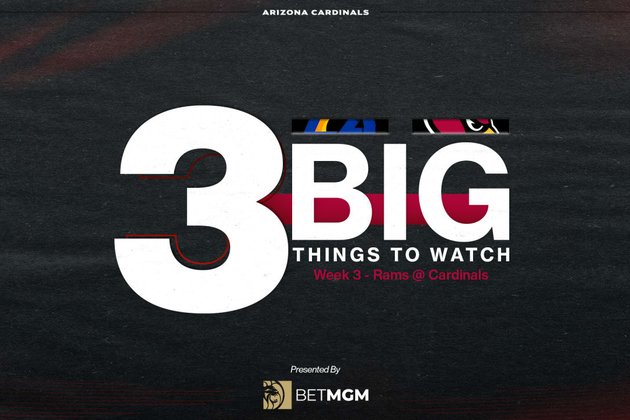 The three biggest things to watch for Sunday when the Cardinals play the Rams at State Farm Stadium:

So There Is This Wrecking Ball Named Aaron Donald ...

Aaron Donald is the best defensive player in the league. Period. Last year, he wasn't as easy to notice in the game the Cardinals won. The two the Cardinals lost to the Rams? Especially the Monday night game, it felt like it didn't matter who was playing on the other side with Donald, he was so destructive. The Cardinals need to find some consistency on offense. They seem to be in a good spot on the interior line - if you have to battle Donald, having Justin Pugh and Rodney Hudson and Will Hernandez healthy and coming off a good game is ideal. Donald isn't going to be neutralized. But the Cardinals have to find a way to run, and you can't let Kyler Murray be thinking about a wild A.D. on every play.

Defense Needs To Show One Half Equals Ram Tough

J.J. Watt said the defensive turnaround in Las Vegas was just that they started playing better. #analysis. But how does that translate? Defensive coordinator Vance Joseph said the Raiders problems was simply about third downs - had the Cardinals not been so leaky in the first half in that regard, a couple of touchdowns would have been field goals. Perhaps. But the Cardinals will be tested by a Sean McVay offense that often gives them fits anyway. Cooper Kupp everywhere, motion and midrange passes, tight end Tyler Higbee causing a problem. The Rams haven't been great this season; their running game has been underproductive and Matthew Stafford has thrown five interceptions in two games. The Cardinals want to make sure they continue to trend in the right direction.

The McVay Conundrum And The Home Game Hurdle

The Cardinals snapped their drought against the Rams and McVay the first meeting in 2021 but they are still 1-10 since McVay took over L.A. in 2017 (that spans three Cardinals coaches), including last year's playoff game. The Cardinals would like to start balancing that out. But perhaps more important is the seven straight home games the Cards have dropped at State Farm Stadium; the building has long been a difficult place for opponents and that hasn't been the case of late. To snap that streak - and topple the Super Bowl champs in the process - would be an enjoyable way to follow up last week's win.