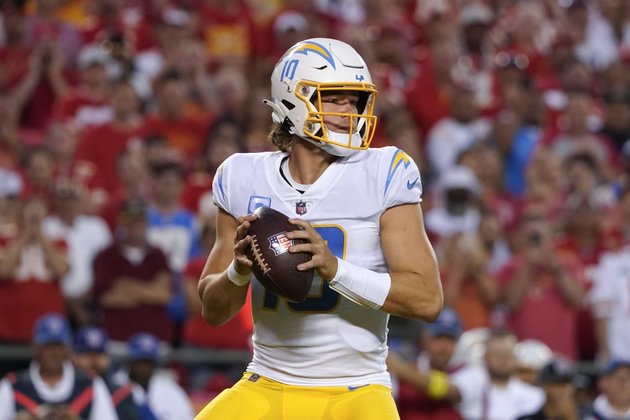 JACKSONVILLE - Jaguars.com senior writer John Oehser each week during the 2022 regular season will speak with a writer or media member covering the Jaguars' opponent.

Question: The Chargers are 1-1 with a season-opening victory over the Las Vegas Raiders and a narrow loss this past Thursday to the Kansas City Chiefs. Both were AFC West games. How do the Chargers feel about this start? What's their state of mind entering Sunday?

A: My guess is it's one of these things that could go down to game time. He could be out there warming up. They usually don't rule someone out until they absolutely have to. We'll see. He did not look good there at the end of that game [against the Chiefs]. He was still playing well, but you could tell he was really hurting.

Q: National expectations are that the Chargers are a playoff team that could contend for the Super Bowl. Are those the expectations of those close to this team?

A: Expectations around this team are pretty similar to what people think nationally. They invested a lot of money and resources in the defense, and you can see a difference. Herbert is so good. One thing his teammates say about him is they're never out of these games. He was obviously hurt bad late against the Chiefs. He looked like he was in major distress and he almost brought them back to win. He probably had no business being in the last five minutes. Everybody who follows this team says, "How is this going to go wrong?" That was sort of a theme in training camp: "How will this get messed up? - because that's what the Chargers do." If Herbert gets hurt, then that does change things. But the expectations around this team is they're good enough to win right now.

Q: Herbert is generally considered one of the top three or so quarterbacks in the NFL. Tell me something about him that makes him good that maybe people don't see at first glance.

A: One thing a lot of the Chargers talk about is how he processes at the line of scrimmage. He's so smart and he's such a good student. He loves studying and he loves studying opponents. That's something he does probably as much as any quarterback who's ever done it. You can see that he's going to be an Aaron Rodgers, Peyton Manning, Tom Brady type. It's very rare that he's going to get outsmarted. Everyone knows the physical side. You see that constantly. It's the mental thing. He knows what the other team is doing. When you can execute with his physical skills and combine that with what he does mentally ... that's probably the thing that if you don't see him day in and day out, you wouldn't understand or appreciate it. The Chargers certainly do and they talk a lot about it.

Q: How strong are they offensively around Herbert?

A: The offensive line is a lot better than it was a couple of years ago. The last two first-round picks have been offensive linemen (offensive tackle Rashawn Slater, 2021; guard Zion Johnson, 2022), so they've made a commitment that they were going to get better and I think they have. You have [wide receiver] Keenan Allen, [running back] Austin Ekeler and [wide receiver] Mike Williams. All three are Pro Bowl- type players. They're good offensively. They were Top 5 in the NFL last year in yards and points. There's no reason they shouldn't be as good or better than they were last year.

Q: How good is this defense?

A: They look a lot better. Their run defense is definitely better. They got two new tackles (free agents Austin Johnson and Sebastian Joseph-Day). They got [outside linebacker Khalil] Mack and [inside linebacker] Kyle Van Noy. As long as [safety] Derwin James is healthy, they're going to be really good. Their defense looks a lot better. We'll see how it all comes together, but that's why this team expects big things. Their offense was great last year and they were 9-8. The thing they had to fix was their defense. Staley went in the offseason, I think, and just said, "We can't win with this defense. We have to get some real guys in here, guys who know what they're doing, get some real pros ... that's what they did." They definitely look much more stout and much more consistent on defense than they did last year.

Q: Is this a case where the Chargers have a multi-year window or is this, "Win now?"

A: I think the next couple of years, they're making a run here. It's not Super Bowl or Bust the way the [Los Angeles] Rams were last year. They're looking at a couple-of-year window where they're going to try with this group, then they'll see where they're at. They're definitely trying to win before they have to pay Herbert big time and his salary-cap hit is huge. I would say it's a couple-of-year deal now, then after his contract hits they're looking at redoing some of their roster.

Q: Is this a Super Bowl team?

A: I think they have a chance, other than Herbert or James getting hurt. If those two guys are healthy, they're as good as anybody. They could play the Chiefs ten times and go 5-5. I think if they played the [Buffalo] Bills, those would all be fourth-quarter games. They're a legitimate contender.