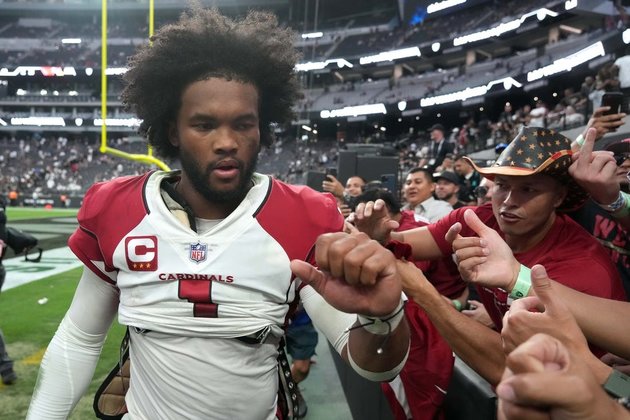 Las Vegas police are investigating allegations that a fan struck Arizona quarterback Kyler Murray in the aftermath of the Cardinals' stunning 29-23 overtime victory over the Raiders on Sunday.

Several social media videos show a fan reaching out with a flat hand and striking Murray in the face as he celebrated the game-winning fumble return touchdown with Cardinals fans in attendance.

"The Raiders are aware of the incident and are cooperating with the Las Vegas Metro Police Department on its investigation," the Raiders said in a statement to USA Today.

Murray immediately confronted the fan who hit him before removing himself from the area.

The Cardinals forced overtime and the Raiders had the ball when a big hit on Raiders receiver Hunter Renfrow dislodged the ball. The Cardinals' Byron Murphy Jr. scooped and scored to end the game, setting off the raucous celebration.

Murray threw for 277 yards and a touchdown in guiding the Cardinals to 16 fourth-quarter points to force OT.